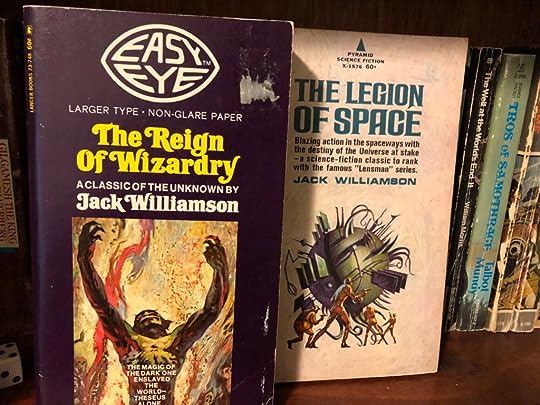 Jack Williamson on the shelf.

We reach at last Jack Williamson, the penultimate entry in this slapdash consideration of Appendix N. Considering how prolific Jack Williamson was during his lengthy, exemplary career, I’m surprised I’ve read so little of his work. The man nearly reached a century and was producing fiction for most of it, having his first story published at the age of twenty.

His most famous work might be The Legion of Space, a sort of Three Musketeers space adventure serial. I enjoyed the first volume. It doesn’t bear up well under critical scrutiny, but if that’s the sort of reader you are then Jack Williamson adventure stories aren’t for you. Climb aboard, buckle up, and enjoy the ride. Don’t bother observing the vehicle you are riding too closely.

Williamson is primarily known as a science fiction author. But I want to discuss his fantasy, specifically Reign of Wizardry. When I find myself in a used bookstore I’m always on the lookout for vintage sword-and-sorcery, some forgotten classic or stand-out novel that never received its just due. Usually I’m disappointed, finding a subpar or at best mediocre effort. But Reign of Wizardry is that rare, satisfying find. The real goods.

Reign of Wizardry is pseudo-historical S&S, playing with the Theseus myth. It throws in many of the tropes: the sword forged from meteoric iron, magic, bits of science as magic, sea battles, sword fights, dungeon crawls, arena duels, prison escapes, etc. The story opens with action and rolls on from there without slowing. Williamson was a master at keeping the plot going, moving from danger to danger without a pause for breath.

I can’t swear Gary Gygax read this one, but I wouldn’t be surprised. We have illusions, polymorphing, lightning bolts, a sort of bronze golem in the form of Talos, labyrinths, and any number of other standbys that would be at home in any D&D adventure.

I’ll be keeping my eye out for more early Jack Williamson. I suggest you do the same.