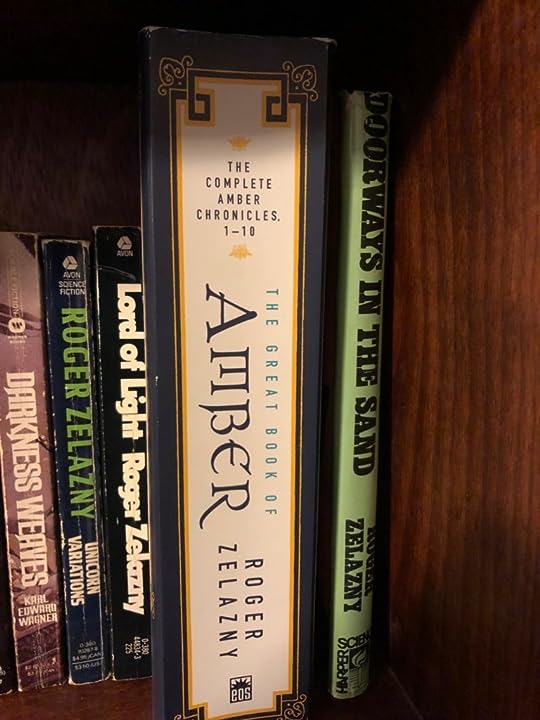 As it inevitably must, this series on Appendix N reaches its end. At least we go out on a high note, with that nonpareil, Roger Zelazny.

Roger Zelazny is best known for his Amber novels. Amber is the city of which all other cities are mere reflections. It is located in the one, ‘true’ Earth. Earth Prime if you like. The light source for Plato’s cave. It is the epicenter of the multiverse. An infinity of alternate realities (ours, for example) radiate from it like ripples in a pond.

A member of the royal family of Amber can traverse these other dimensions – these ‘shadows.’ He can travel to any world he can imagine by adding or subtracting elements of his surroundings as he goes.

The primary narrative of the original ‘Amber’ series concerns the dynastic struggle ensuing upon the disappearance of the king. The protagonist and first person narrator, Corwin, is one of the princes and a claimant for the throne. The story moves crisply. Intrigues, alliances, civil war, treachery, heroic battles, a seemingly inexhaustible supply of exotic locations and vividly imagined beings.

The influence of ‘Amber’ on Dungeons and Dragons can be inferred from the accepted notion of dimensional travel in the game, of the ability to access other planes of existence through spells or magical devices. Zelazny hardly created the first example of the concept of the multiverse, but his pedigree is irreproachable and his variation on the theme is great fun to read.

Another influence, perhaps, on D&D is the game’s inclusion of decks of cards as magical treasure. This might be a nod to the decks Amber’s ruling family use to communicate with each other or even travel instantaneously. The tarot predates Zelazny’s work, of course, and other writers – notably Charles Williams – have employed it effectively in their fiction. But ‘Amber’ might have been an immediate influence.

Amber, as a fixed point and origin of shadows, can also be considered as a source of stability, or ‘Law.’ The “Courts of Chaos” counterbalance this manichean multiverse. This perhaps provided yet another fictional example for the alignment trope that D&D appropriated for the original editions.

Are there other contributions to D&D from Zelazny’s classic that I’ve missed? Any glaring examples I’ve forgotten?

I hope you’ve enjoyed visiting, or re-visiting Appendix N with me. Thanks for coming along.