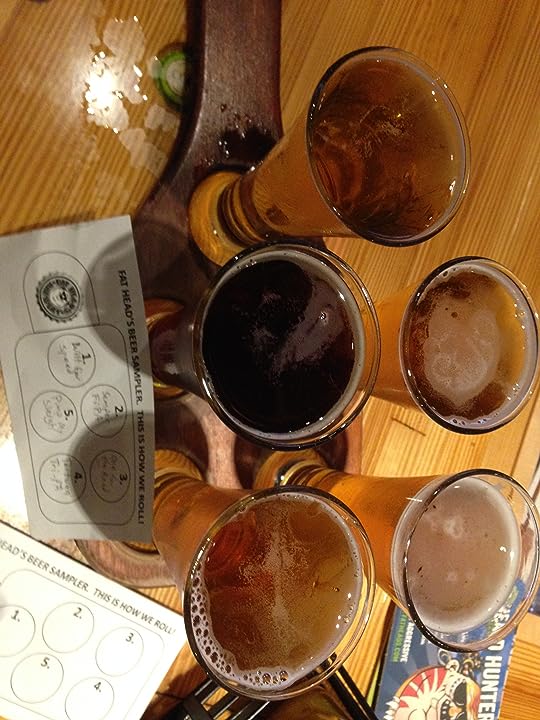 My Beautiful Wife and the Heir Apparent have been away for a couple of weeks. Too long, really. Still the time intervening between departure and return must be filled. I’ve been reading, caught up on some films, gotten a solid push on the second draft of “Boss.” Productive, I think. Stimulative to the synapses, fueling the story muscles. But a man can’t work all the time.

I managed to visit a few brewpubs that I’ve missed. It’s not hard to miss a new one. They spring up in Portland like mushrooms. I posted some pictures of last weekend’s beer exploration. Today I’ll provide some tasting notes and comments about this weekend. For those of you who read this web log solely for thoughts on books, speculative fiction, sci-fi conventions and whatnot, this is a good place to stop reading.

Fat Head’s Brewery in Northwest Portland is the Oregon branch of an Ohio-based operation. But it brew on the premises and appears to develop a good number of its recipes independently. It is a cavernous space with a lot of tables. Oregon was playing Cal on the tube above the bar. And I ordered a five beer taster for $11. A bit steep I think. Perhaps someone has a spreadsheet with the price of taster trays in the greater Portland area.

The thing is, I took notes. Perhaps less detailed notes than usual, but here they are.

Built for Speed IPA. 6.3% Typical West Coast IPA, but not in a good way. Revisit — Pretty good after food.

One for the Road IIPA. 8.5% Raisin and leather balancing a near perfect amount of hops. Near to classic beer status. Revisit — Unbalanced.

Tortuga Tri-PA. 9.25% Pineapple wallop. Aftertaste a lingering cigarette bitterness. Might grow on me, but no an immediate favorite. Revisit — Unchanged.

Pimp My Sleigh. 10.5%. Belgian Style Christmas Ale. Tastes like a near textbook barleywine. Perhaps a trifle thin/vinegary. Could use a chewier, raisin finish. Revisit — Minor improvement.

I think I’d go back there, try some more options. I find it interesting that revisiting a beer after having run some different flavors over the tastebuds occasionally altered my initial impression.

I visited Great Notion Brewing because a local publication listed one of its beers as the best beer in Portland. So of course the pub was completely sold out of the beer in question. I’d say just my luck but I probably should have seen that coming.

Great Notion is a typical example of the Portland brewpub. A smallish, re-purposed space decorated in a vaguely woodsy, Northwestern fashion. I ordered a sandwich and a five beer-taster tray. The sandwich was reasonably priced, $9 for a sandwich and generously sized side salad. The taster tray — not so much. $14! That can’t be the going rate, can it? 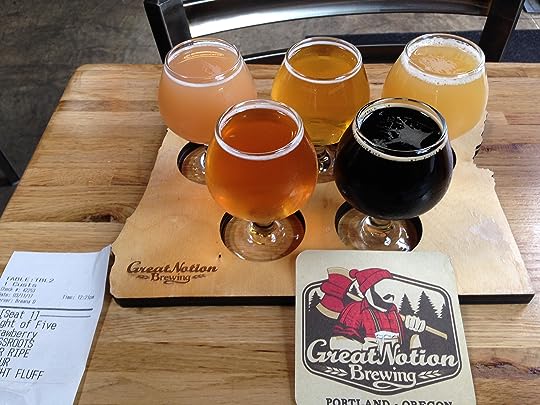 At least the beer was good.

Strawberry Cream IPA. 7%. Slight bite of hops to offset the smoothness. Strawberries and cream…and hops? Who’d a thunk it? Works though.

Super Ripe IIPA. 9.5%. Grapefruit and sucrose. In a good way.

Midnight Fluff. 10%. Stout. Feeling diabetic after one sip. Dip a s’more in it or pour it over ice cream. This is dessert beer overkill. Good, though.

I’d go back. But I think I’d just order a pint of something and hope for the best.

Hey, if you’re enjoying my particular brand of nonsense, please exercise the like and share functions of your social media platform of choice. Think of the children.