Tea With the Black Dragon. Add a Splash of Gin to Mine. Resurrected Post.

Tea With the Black Dragon. Add a Splash of Gin to Mine. 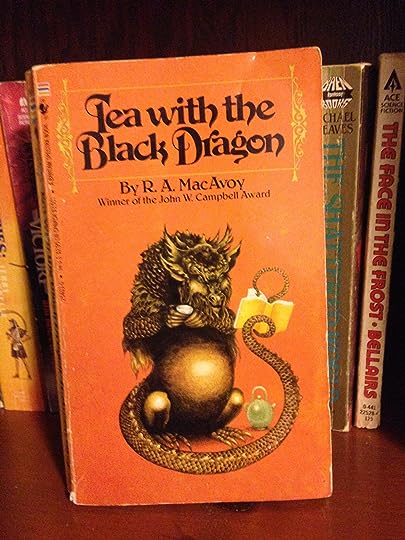 Yesterday I finished R.A. MacAvoy’s Tea With the Black Dragon. Serendipitous timing I think considering today is Mother’s Day. If you haven’t read the book, I suppose that comment requires some explanation.

Tea With the Black Dragon is a short novel, of a brevity we sadly don’t see much any longer. It features only a few characters, among whom Margaret Macnamara features prominently. She is a mother, searching for her adult daughter. She is of an age that in most novels would see her as a secondary character, relegated to caretaker or giver of sage advice. Instead here she is the prime mover and a fully realized and interesting character. And a mother. So, happy Mother’s Day Margaret Macnamara wherever you are.

I found the novel very refreshing. Some might consider it odd that I consider a book from the early 1980s to be refreshing instead of something contemporary and novel. Truth is that current books make up only a minuscule portion of my reading diet. Most of what I read is older stuff. Tea With the Black Dragon is far from epic door stopper fantasy. It isn’t vampire chicks on bikes urban fantasy. It isn’t even twee, cozy fantasy. Instead it is sui generis. It doesn’t deal in any tropes. If you rounded up the usual suspects and put them in a lineup, you’d come away disappointed — none of them feature in Tea. Yet the narrative (brief as it is) is entirely satisfying, meditative, funny, and — surprisingly to me — replete with action. Fight scenes? Check. Speeding cars? Check. Gunfire. Check and double check.

Tea will stand as a reminder to me of the absolute freedom fantasy allows a writer. And I am thankful for that.