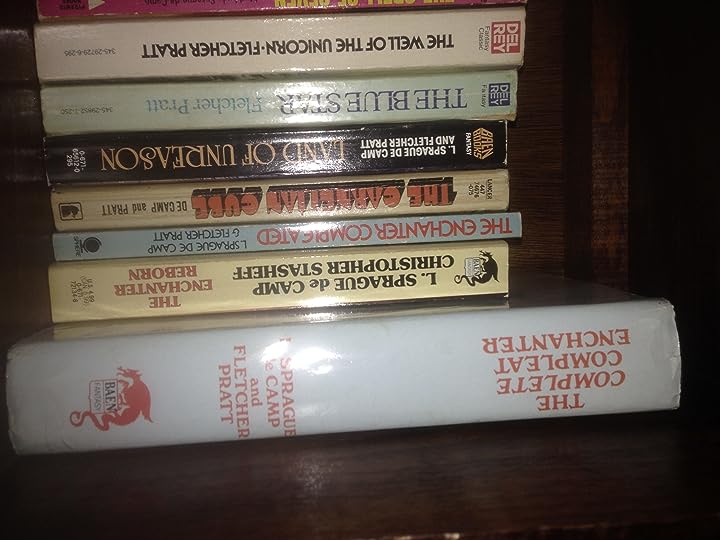 Fletcher Pratt, or more precisely, Murray Fletcher Pratt, lived an intriguing life. Seriously, look him up. The man moved in the right circles. Over there, Isaac Asimov, over here, Rex Stout. A true man of letters, making his living as much with non-fiction as with fiction. History, reviews, short stories, novels. Pratt was a man of accomplishment. And I’m sure Gary Gygax was familiar with Pratt’s development of rules for wargaming naval combat, using the tiles of his kitchen floor for grid squares.

Gygax follows the listing of Pratt in Appendix N with “BLUE STAR; et. al.” Blue Star is entertaining enough novel, full of political intrigue, espionage, witchcraft, and romance. But I rather doubt it had any real influence on D&D. The setting is a quasi-Eighteenth century faux Europe, not quasi-medieval. It isn’t action heavy, nor much reminiscent of the swords-and-sorcery that dominates most of the rest of Appendix N.

No, I think Pratt’s influence comes from the “et al,” specifically The Well of the Unicorn. Well is less well known than it deserves. It is one of the cornerstones of Twentieth century fantasy. I got my copy at the age of thirteen or fourteen. After the Lord of the Rings, Well was foundational to my conception of the fantasy genre, forming my expectations of coming of age heroics, monsters, journeys, magic, and romance. I’ve read it a couple of times since. My recollection of my first couple readings is one of complete enjoyment up until the end, which I considered truncated, lacking, as if I’d only been given half a book or should be expecting a sequel. A more mature reading I think, is that Pratt delivers a realistic ending; that completion of a task does not sew up all loose ends and that there is always more to accomplish.

I think I’ll read Well again, once I deal with the current backlog. If my recommendation carries any weight, this is one to read.

Pratt’s name will be forever tied with that of L. Sprague de Camp’s. I’ve referenced their collaborations in a previous post. They worked well together and wrote fantastic, whimsical, and downright funny material. I can’t help but think, however, that the balance of the whimsy came from de Camp. Pratt was, I think, an altogether more serious writer. Read a fantasy of de Camp’s — say, Tritonian Ring — and then read The Well of the Unicorn. It becomes apparent that de Camp’s tongue is stuck deeper into his cheek than Pratt’s. Pratt projected a more somber tone. Somber is perhaps the wrong word, as he had a light enough touch. Let’s say he evinced a greater seriousness of purpose. The stakes his characters play for are high and they seem more aware of it than do de Camp’s. Pratt’s style lends an element of gravitas and profundity that is absent in de Camp’s fiction. This is not a criticism of de Camp, simply a comparison. One is not necessarily better than the other, and as noted, in combination they were sublime.

So, to sum up, go forth and read The Well of the Unicorn. Don’t dawdle.