I picked up a paperback copy of Terry Carr’s inaugural Year’s Finest Fantasy. In all honesty I may have read this before, as a kid, shortly after its publication in 1978. The more I read (or re-read) the more convinced I became. Some of these stories are familiar, naggingly so. I can’t speculate based on the Jack Vance story: I’ve read Bagful of Dreams so often I can’t recall when I first read it. But the Steven King story has stuck with me for a long time. A very long time. And the Frankenstein story draws resonance from old memories. Maybe I didn’t read this back in the day. Maybe. But if not, I’ve read most (or all)  of its contents in other anthologies. So, what did I think?

The Bagful of Dreams. Jack Vance. A masterpiece I have read often before, and written about here.

The Cat from Hell. Stephen King. This one stuck with me the first time I read, as did a number of other King short stories. Fantasy, as defined by Carr, ie expansive enough to include horror, which Cat decidedly is. Agreeably gruesome.

Black as the Pit, From Pole to Pole. Steven Utley and Howard Waldrop. I am — almost — certain I’ve read this before. It’s like a renascent recollection, arising when half asleep, of listening to an old radio show. This continuation of Mary Shelley’s Frankenstein is a hallucinogenic, subterranean journey; a farrago of historical and literary allusions. If I did read this as a kid, I certainly got more out of it this time around. I won’t spoil the easter eggs. Hunt them yourself.

The Kugelmass Episode. Woody Allen. Now I know I’ve read this one before, though I recall the ending involving a dictionary rather than a Spanish language textbook. I do remember it being funny. I probably missed several of the jokes, back in the day.

Manatee Gal Ain’t You Coming Out Tonight. Avram Davidson. It was a pleasure to encounter Avram Davidson again. He was a criminally unsung writer and stylist par excellence. Manatee Gal is a slow burn that in the hands of a lesser writer would bore. But we are in capable hands with AD. The culmination…well, ick. But AD pulls it off masterfully. Clark Ashton Smith could have done it. Jack Vance, maybe, with a degree of tongue-in-cheek humor. This is a terrific exercise in how to tell any story with grace, skill, and panache.

Getting Back to Before it Began. Raylyn Moore. A bagatelle.

Descent of Man. T. Coraghessan Boyle. I’ve read Boyle before. This story matched my memory of his output with precision. Descent is a tragicomedy science-fiction story. What it is doing in this anthology beyond stretching definitions to the breaking point I don’t know. I don’t hold any hardline position on genre boundaries or definitions, so if Terry Carr wanted to consider it a fantasy, then so be it. In any case it was a fine story.

Probability Storm. Julian Reid. I’ve always been a sucker for tavern stories. This one is delightful, clever, amusing. Rather a companion piece or adjunct to Spider Robinson’s Callahan’s Saloon stories. Again I’m nearly positive I’ve read this anthology before: the specifics of the end of this tale have remained with me. I wonder if Julian Reid wrote any more of these Rafferty’s tales.

Growing Boys. Robert Aickman. Not precisely a tedious slog. It is well written and the characters are interesting enough to maintain the reader’s interest. There is, I think, quite a bit going on beneath the surface in an understated, British manner. Some of that I caught, some doubtless eluded me. But I could have used a bit more plot, some connective tissue; a bit of the journalistic who-what-when-why-where. Still, I enjoyed it.

In all, a fine collection, showcasing the breadth of fantasy.

Another showcase is the Texas Renaissance Festival. I drove MBW and the HA north yesterday to check it out. It boasts an impressive layout and infrastructure. Apparently it is open for only two months of the year, and yet consists of extensive, permanent storefronts, eateries, and taverns, all artfully and atmospherically designed. Perhaps the limited duration explains the prices. Maybe I’m just a skinflint, but I balk at spending the price of a six-pack for a single beer. Anyway, I took some pictures. 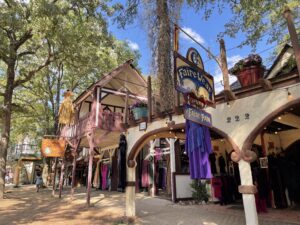 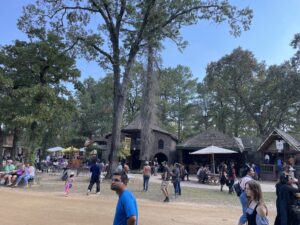 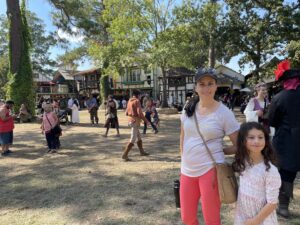 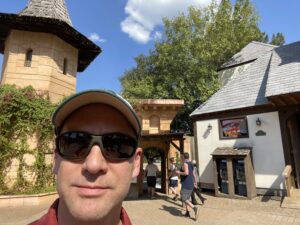 I’d half hoped to engage in some spontaneous marketing. After all, the place teemed with likely customers of fantasy fiction. Yet the milling groups all seemed self-contained. Opportunities for casual conversation failed to arise. (Perhaps if I’d planted myself in Ye-Olde Tavern and splurged on a couple of those $11 beers I might have contrived something. But I was there with my family.) Oh well. I’ll adapt. Now, for example. How’d you like to read some fantastic, swash-buckling adventure? Try this. Or maybe this.

Anyways, if you’ve been skimming this post to get to the next entry in Magnus Stoneslayer’s chronicle, here you go.

I had to kill quite a few men today, dear diary.

A country inn is a very insular place. The social hierarchy of a large city – or a

wolf pack for that matter – is replicated there in microcosm.

I pondered this as I washed down an indifferently roasted joint of mutton with a foaming jack of ale. The pot boy occupied the lowest rung of the status ladder, absorbing abuse even from the serving wenches. The boisterous slab of beef holding court at the table nearest the hearth sat the top rung; no doubt he was a prosperous farmer, still hale but running to fat. The rest jockeyed for positions in between, with the innkeeper himself vying for the role of top dog.

I, of course, was a stranger, an object of curiosity and fear. Someone would see me as a challenge and act. Inevitable. Not the top dog. His position was secure and all he wanted was for me to move along. No, it would be a middling youth, angling to move up, and gain the respect and approval of the regular drinkers.

And so it proved. A youth left the alpha male’s table and strutted over, smelling of fear and beer, to begin baiting the barbarian. I offered him a face saving retreat. A barrel of ale and a blanket under a roof interested me more than a brawl this night. But he’d gone too far to back down. He struck me. So much for my hopes of beer and bed. I stood and clubbed him down with the three legged stool upon which I’d been seated. Now, dear diary, perhaps you have heard tales of tavern brawls in which stools are smashed across combatants heads left and right, leaving a floor buried in splintered kindling. Let me set the record straight: the seat does not break; the skull breaks. The young man dropped into a slowly spreading pool of blood and oozing brain matter.

There was some hope of it ending there. All had seen him strike me. I merely retaliated. I could see reluctance in the eyes of the nearest. But the pack

mentality held too strong. I set my back to the wall and drew my broadsword.

Smoke from the burning inn still rises in the night sky, tracing arabesques across the face of the moon. And I lie by the banked embers of my small fire, while the roof I’d hoped to sleep under smolders in the distance. Once again, I’m bedding down rough, as I’m accustomed to.

Tomorrow, dear diary, will see me cleaning flecks of blood from my sword and honing out nicks in the blade. But for now, I wish you a fond good night, dear diary.