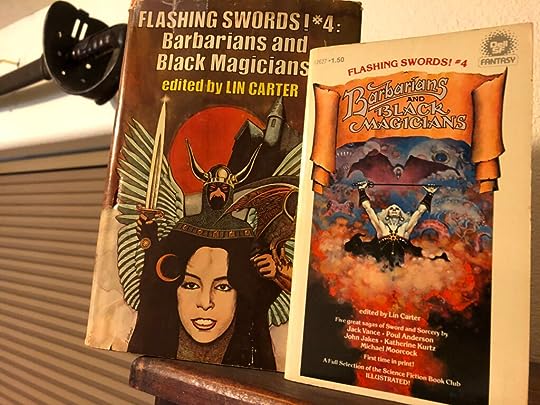 Lin Carter presents yet another anthology in his stellar Swords-and-Sorcery series. This one is Flashing Swords! #4: Barbarians and Black Magicians. Is there more than alliteration fueling the subtitle? He’s certainly doubled the thematic possibilities. Let’s see.

Lin Carter’s introduction is a mere rehash of a theme. Perhaps he was getting tired of covering the same ground in different words. Let’s move on to the content. (Note, I found a good price on a paperback copy, that will match better with the rest of the series on my shelf. The cheap, book club hard back can find a new home, I suppose.)

The Bagful of Dreams. Jack Vance. Seeing Jack VAnce’s name in a publication always makes me happy. Sure, this is a Cugel the Clever story I’ve read before, but I don’t care. Vance’s craft, cadence, and fulsome use of the English language are a pleasure. The droll cynicism of every uttered or internalized thought makes me grin, if not laugh volubly. Cugel is as delightful, amoral, and unredeemable as ever. Vance’s boundless imagination is once again given full rein. Bagful is a superlative tale. I suppose this one falls under the rubric of Black Magicians, embodied in Cugel’s antagonist, Iolo.

The Tupillak. Poul Anderson. Mermen. That Northern Thing. Inuits, magic, mayhem. As should be expected, given the Sagas as an influence, the story is grim and tragic.Anderson brings a historian’s eye, a fantasists’s imagination, and his personal affinity for all things Norse to this one. Skoll. I figure this one is chock-full of Barbarians, from the differing parties’ perspectives, at any rate.

Storm in a Bottle. John Jakes. We had a bagful of dreams. Now we have a storm in a bottle. There’s an anthology concept for you: containers of unexpected things. Call it Oddments. Anyway, it seems every barbarian swordsman must be enslaved at some point in his adventuring career, and Brak is no exception. I”m of two minds about this one. There is some decent adventure in this, and a suggestion of Brak’s intelligence, allowing him to piece together the mystery and solve the puzzle. On the other hand, there is no clean ending to this. Instead it seems the lead-in to another story. A story that does not follow in this anthology. And it all seemed a bit too long and too leadenly constructed to flow well. But stil, it was Brak, fighting sorcery. So, let it slide. And, besides, we get both a Barbarian and a Black Magician. Hurrah.

Swords Against the Marluk. Katherine Kurtz. I confess small familiarity with the Deyrni books. I read one or two of them when I was about twelve. I recall little, other than a certain dissatisfaction with what I felt was a lack of action. I was, remember, only a kid. (Digression begins. I remember much more clearly the library where I read them than the books themselves. I should — I clocked a lot of hours there. This was back in the early ‘80s. Walking a couple of miles by yourself after school to the library to wait two or three hours for your mother ti pick you up wasn’t considered akin to child abuse back then. End digression.) Anyways, the story is a rather confusing muddle for someone unfamiliar with — or who has forgotten — the Deyrni novels. And it certainly isn’t S&S. This is High Fantasy. That’s fine, but it isn’t why I bought FS#4. I found the story largely uninteresting, the magic elaborately detailed fo no particular reason I could see, and the king, Brion, to be a bit of an idiot, without even minimal tactical competence. But, if pseudo-medieval European/quasi-elvish fantasy is what you’re in the mood for, this might do. Black Magician? Check.

The Lands Beyond the World. Michael Moorcock. I have a long-standing prejudice against stories in which the main characters forgets prior adventures, perhaps an entire novel’s worth of events, or even long chapters. I’ve read and invested in these doings. I feel cheated if the character who experienced them no longer recalls them, as if now none of those events were “real.” As if somehow, I had wasted my time. Added to a sort of generalized distaste for Elric and Moorcock’s sketchy, ruminative omphalos fixation, I wasn’t predisposed to like this tale, one that begins with Elric forgetting the events of his previous adventure. But, y’know, this one is all right. As always, when Moorcock exerts himself, he is inventive, painting colorful, exotic word pictures. He gives us a fine ending of swashbuckling and sorcery, as well as an interesting and subtly complex villain. Absent the brooding opening section, I’d consider this a superior Elric yarn. Black Magician? You bet your soul-stealing sword.

So, I’d say Carter delivered on a specific, though extremely broad, premise, giving us stories of Barbarians and Black Magicians. Overall, a fine entry in the series, though I feel with the addition of Katherine Kurtz that Carter is beginning to cast more widely afield for contributors.

Here’s the point in the post where I try to sell you something. I’m pleased to announce that I signed a contract for a three-book series. More on that later. But I can hardly sell you something that isn’t even on the publisher’s schedule yet. So, how about one of these? Or one of these? This, perhaps? Or browse here, see if something catches your eye. If you pick something up, let me know what you think of it. Feedback is, I think, valuable for writer who hopes to do more than just amuse himself with his scribbling.