The Pirate of World’s End: The Returns Diminish 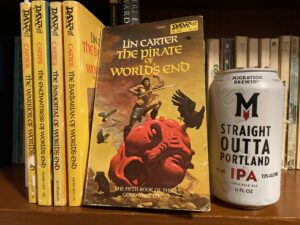 And so we come to The Pirate of World’s End, the fifth book in Lin Carter’s self-described Gondwane Epic. I stand by my previous comments on the books. There was a playful vibrancy about the everything-and-the-kitchen sink gonzo fantasy at first. Yet as I read this fifth volume, I was reminded of a couple of laws of economics. One is Diminishing Returns, in which — all other factors remaining the same — the increase of one unit actually results in less efficiency in production. The other is Decreasing Marginal Utility, in which the satisfaction of consuming a product can drop to zero, or even become negative.

With Pirates, I think Carter managed to demonstrate both.

He still seemed to be having fun, throwing every idea on the page — no matter how ludicrous — that crossed his mind. Yet what started as a fresh and inventive funhouse adventure turned into a farce. Strangely enough, for a writer committed to novelty and over-the-top inventiveness, once the plot (such as it is) commences, Carter resorts to every hackneyed Pirate trope. Seven hundred million years in the future ought to allow for some departure from bandanas and cutlasses, eye patches and garbled speech.

And as for Ganelon Silvermane: as the series went on, the wooden and uninteresting Ganelon has been relegated gradually to a spear carrier in his own opera. Perhaps Carter realized this, finding the supporting characters more fun to write and letting them become the leads.

Frankly, reading the last couple of volumes was a chore. I’m glad to be done. (Though I understand there is a sixth, Giant of World’s End, which I think he wrote prior to the others. Should I track that one down?) I maintain that the first two were entertaining, and I can see why Gygax included the series in Appendix N. But like cheap Halloween candy, more isn’t better.

This is the point at which I recommend one of my own books. Since I’m a traditionalist I’ll do so. Today I’m going to suggest Under Strange Suns, my science fiction/sword and planet novel. Give it a try, leave a review.