The Enchantress of World’s End. There is Such a Thing as Restraint, Mr. Carter. Resurrected Post.

The Enchantress of World’s End. There is Such a Thing as Restraint, Mr. Carter. 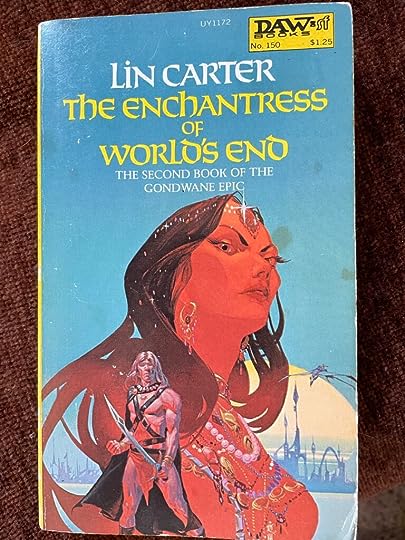 Lin Carter apparently enjoyed letting his imagination roam free in the first World’s End book (The Warrior of World’s End) so much that he figured even greater license would be even more fun. There may be something to the idea that more is better, but there is also such a thing as restraint.

The Enchantress of World’s End is — eclectic. It’s a gallimaufry of whatever Carter had in the cupboard. And his cupboard is vast. It’s one part Wizard of Oz, a dash of Amerberite world-walking, a splash of the oriental tale as filtered through Hannah-Barbera cartoons. There is a through-line of sorts, so the narrative coheres — sort of. There are aspects I found a bit distasteful, and much that seemed just rather silly. And there was a distinct lack of menace. I never considered any of the characters to be under any real threat.

Still, the couple of chapters featuring the dragon were, while undeniably self-indulgent, worth the read for any aficionado of the heroic fiction genre. I won’t spoil it. But this book is worth keeping on my shelves as a reference work for one chapter alone.

So, I don’t regret reading this one. On the other hand, I feel as though I ought to take a break from this series in order to read something more substantial. Man can’t live on a diet of macaroons and sugar cookies. My brain requires more nourishing fare.

Of course, who am I to talk? I mean, look at this.