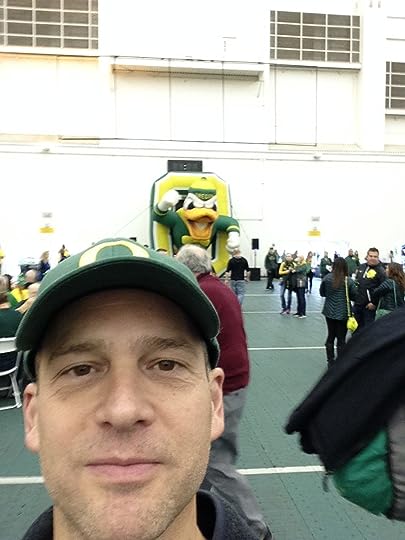 It never rains at Autzen Stadium. At least, it didn’t last night.

The drive down I-5 to Eugene, Oregon suffered from the typical bottlenecks that develop when both the University of Oregon and Oregon State University host home football games on the same day. Occasional squalls and heavy, lowering cloud banks hinted that the night’s game would be a wet one.

Steelhead Brewing is a comfortable place to await a football game. The taster tray provides a sampling of adequate to good beers. But the way to go at Steelhead is to order the Hopasaurus Rex. Or, if it is available, the Megasaurus Rex. There, valuable travel tips for you.

Oakshire Brewing is a somewhat less homey environment. Think picnic tables in a warehouse, rather than the more traditional pub layout of Steelhead. But having the menu consist of whatever the adjoining food carts offered is a fun touch. I wonder if a massive slab of breaded chicken dwarfing an utterly insufficient biscuit really counts as a sandwich. It tasted great, but sort of dispensed with the fundamental utilitarian purpose of the sandwich.

Autzen Stadium is a terrific venue for football. The atmosphere is vibrant. Everyone nearby is immediately your confederate and best friend. I’ve been to many games there over the years and it never disappoints. It certainly didn’t last night. The weather cleared up nicely. The game was exciting. The crowd was raucous (at least I was.)

If you’ve never been, consider adding a game at Autzen to your travel agenda. And, if you can, stop at Track Town Pizza afterwards for a pie and a pitcher. You can thank me later.