The HA enjoyed a school event in the gymnasium, staying up late for games, crafts, an animated flick, and running around with her little friends. The school branded this as parents date night. So MBW and I took advantage of that. After dropping off the HA, we drove to a ramshackle brewpub/venue a few miles away. The HA’s school is in a town on the distant fringes of the Houston metroplex, the land usage growing increasingly rural from there. The pub, Fublrook Ale Works, fits the location perfectly. Parking in gravel or on the grass. A refurbished warehouse or barn with an outdoor patio and music stage built, the kitchen a retired food truck. A cover band played country blues rock until sundown. After that the set switched to country singalong classics (David Alan Coe, Hank Williams, Jr., etc.) After a couple of months living in Texas I — finally — began to feel  I truly was in Texas. And that I belonged. It was nice.

But, you ask, how was the beer? Well, let me regale you with a bit of Texas beer tasting. 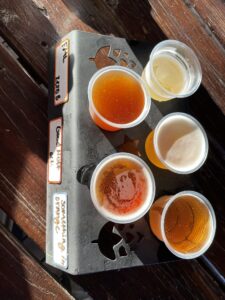 I ordered a flight. The FML (Fulbrook Mexican Lager) was a promising beginning, crisp and citric. I don’t know if they added lime peel at the boil, an extract, or squeezed in fresh lime juice as a later addition. Don’t care. I’ve achieved somewhat similar results homebrewing, but this was better, if I’m being honest. The Zero Bocks Given was decent, but a bit muddled, if you know what I mean. Not a clear cut example of the style. The Good Nuff was more than good enough. I’ve found Texas more miss than hit when it comes to IPAs, but the Good Nuff is a fine version, balanced, drinkable, without wimping out on the hops. The Octoberish — well, the less said the better. I didn’t finish the taster. That ought to tell you something. Something in the Orange was a surprise. It smelled like orange juice and tasted like a creamsicle. I don’t think I’d ever order more than one. It’s a bit of a stunt, a cream ale bordering on the flavored seltzer category. But I liked it.

And now, for those of you still following the exploits of Magnus Stoneslayer:

The young lady in my care is playing coy, dear diary.  It happens.  Most of the women

who cross my path — the tavern trulls, dancing girls, princesses, temple slaves, and the like  — are about as subtle as a mare in estrus.  I find it refreshing when one dons the demure mask. Or, as this one had, feigns repulsion.

For example, when I quartered the hare I’d brought down for the evening meal with my new throwing stick, she uttered disgusted protests at my performing the function manually.  I have no time for civilized fastidiousness.  If she wants the meat surgically dismembered and roasted in fennel and white wine sauce she should have brought along a butcher and a chef. A rabbit torn by hand into four bloody chunks is what she gets for having me along instead of an entourage.

I know it is all an act.  I’ve seen this performance before, curtain to curtain.  After

the smooth skinned, perfumed and powdered courtiers she experienced all her life the noble savage will prove irresistible.  I may have to save her life in some heroic fashion: pull her free from a torrent of white water at the risk of drowning myself, throttle a menacing wild boar, or slay a few brigands who are in the process of making off with her for nefarious purposes.  After which I will leave her unceremoniously with a grunted warning to take better care of herself because we aren’t safe behind the walls of her daddy’s hall.  This will throw her; initially she will anticipate that her rescuer will demand gratitude.  The psychology of the saved damsel is invariable: when the barbarian warrior snatches her from the jaws of doom and looks expectant, the damsel — sooner or later— begins to suspect not only the motives of her savage savior but also the bona fides of the rescue itself, no matter how improbable or absurd it would be for him to have staged the event.  So, the experienced barbarian bypasses the psychodrama.  He demonstrates his disdain for the silly little bint who allowed herself to fall into such a predicament to begin with.  She is now left feeling both indebted and ignored.  Gratitude she can swallow.  Being overlooked she will not tolerate.

You will see, dear diary.  The moment of crisis is impending, an immutable fact of a savage hero’s existence in these circumstances.  I’d best keep my already keen native senses on even sharper alert tonight for wolves, bestial, half-human apes, demonic religious cults, and the like.  So, needing to rest before nigh inevitable exertions, I bid you a fond good night.

So, how do you think that’s going to work out for Magnus? Check in next week. Previous entries can be found here, here, here, here, here, and here.) If you want more immediate story gratification, why not pick up one of my books? How about (random die roll) Thick As Thieves?